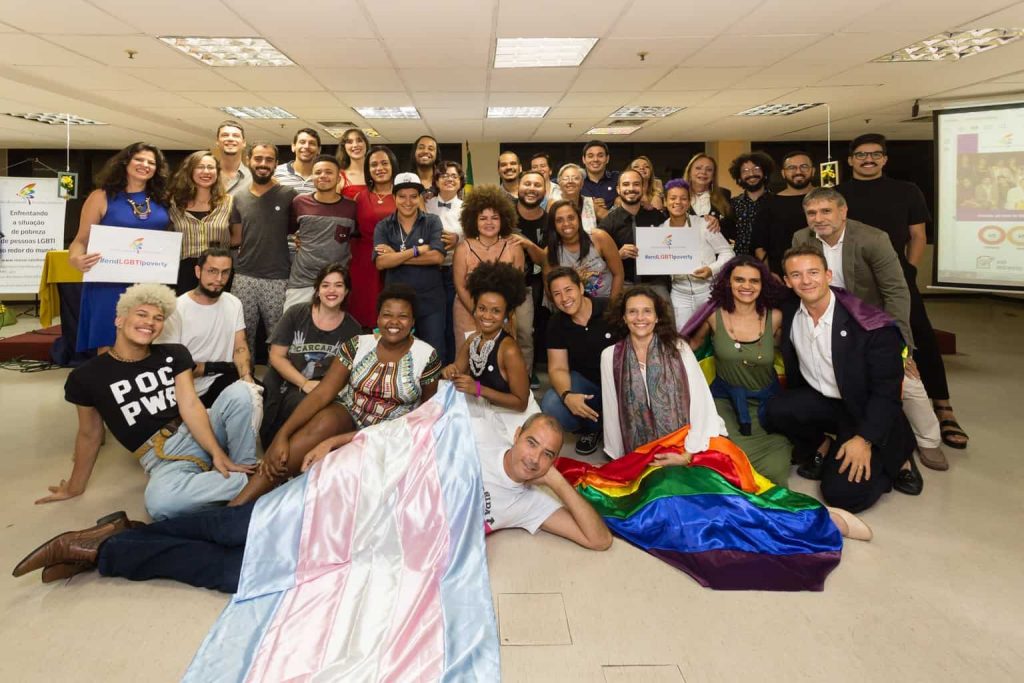 Debunking the stereotyping of LGBT in Brazil as sex workers or working in beauty or the arts only, on 2nd May 2018, 27 LGBTI people graduated from the 5th entrepreneurship training run by Micro Rainbow Brazil exclusively for low-income LGBT people.

MRI has been working in Brazil since 2012 helping low-income LGBT people to open their own small businesses and to improve their employment skills.

The project was delivered in close partnership with Grupo Arco Íris and Soluções Inclusivas and with funding from the European Union. Since 2015, it has reached 200 vulnerable LGBT people in metropolitan Rio de Janeiro. Of those, 153 have attended five entrepreneurship trainings.

Thanks to this work, 88 LGBT people have significantly improved their livelihoods, finding jobs and setting up small businesses. Such small businesses are varied: arts and crafts, cultural production, music, education, photography, cooking, and construction among others. This shows that LGBT people have the desire and qualifications to succeed professionally in the most diverse areas.

Meire Santos, 56, is a microentrepreneur and teacher. She highlights the relevance of the project and says that she enrolled on the course to pursue an ambition.

“At the beginning, when you have a business, you do not know much about finances and the administration of a company because it is almost just about surviving. I left my job and my barbecue tent to start my business, which I wanted to do all my life”.

Meire has a pet accessories factory. In the future, she wants to hire other LGBT people to help out with the company.

The photographer Glauco Vital, underlines the importance of actions such as the MRI Brazil project.

“The course has shown me that it is possible to get where I want to be, like straight people and any other person does. There I learned to use my sexual orientation as a differential to even win more customers. The course was important because it helped us in understanding the administrative and financial part of a company. It also provided us with psychological support”.

Following the guidance that Glauco received in the classroom, he was able to register as an official micro-entrepreneur.

Brazil is a society marked by various forms of discrimination and prejudice and has a labour market that is resistant to human diversity. Micro Rainbow’s training was crucial in identifying the potential for LGBT people in such a difficult context. Victor Cantuária, who works in the cultural production company Favelab, describes how entrepreneurship trainings and guidance are delivered in a heterogeneous way only.

“I’ve been to many places that talked about entrepreneurship, but they never had any LGBT focus, which is the opposite to the MRI course. In those trainings I did not feel represented. Thanks to the MRI training, we also created a new network, which is very important to strengthen the individuals and initiatives of each one of us”.

What the European Union say

Since MRI started working in Brazil in 2012 we have witnessed a constant deterioration of human rights in the country. LGBT people’s lives and livelihoods have suffered from the recent political and economic crisis and the increasingly hostile social climate which is fuelled by religious extremism. The recent brutal execution of lesbian councillor Marielle Franco is a reminder of the extreme violence that LGBT people endure in Brazil. When livelihoods and lives are at risk, actions like this one are crucial, not only in Rio de Janeiro but also in other parts of the country.

“According to the World Bank, between 2003 and 2014, Brazil experienced a phase of economic and social progress in which more than 29 million people stepped out poverty and inequality. However, some social groups such as LGBTI populations still suffer exclusion, violence and discrimination. Thus, projects like this one that tackle barriers to access the labour market are more needed than ever. The European Union is very happy to see a new class, the 5th class, graduating from the entrepreneurship course. A very successful course that has already helped more than 200 people in vulnerable situations”.

The achievements in the last three years gained the project second place in the Láurea-CAF 2017 award. The award was given by the Latin American Development Bank together with the Entrepreneurial Alliance, for the best initiatives supporting micro-entrepreneurs in Brazil. For more pictures of the event, please see the MRI Brazil Facebook page.